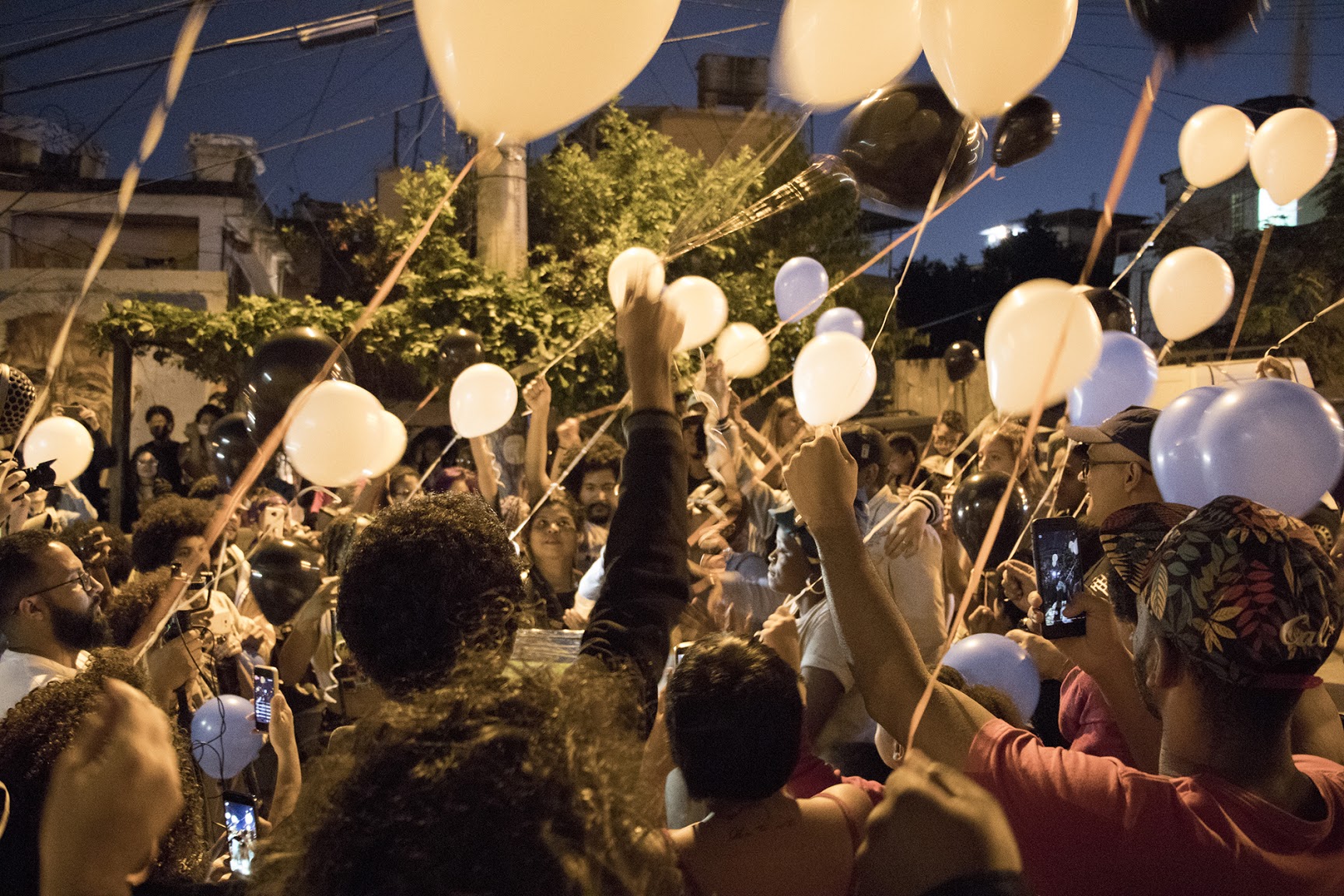 Catalytic Communities: The Role of the Peripheries in Democracy

We tend to speak from a place of fear and disillusionment concerning Brazilian democracy. However, for a long time, we have been fighting to stop talking about favelas and peripheries from this place of fear and disillusionment. We at Catalytic Communities believe in the power, creativity, and solutions that stem from favelas and peripheries. We have been fighting for 18 years for the effective integration of all parts of the city of Rio de Janeiro, for the equal treatment of its residents, and for the guarantee of their rights and freedoms. And we share this path of struggle with many others.

We do, however, fear that the announced weakening of democratic principles may have very material consequences for the bodies and minds of those living in favelas and peripheries. Nevertheless, we understand that the present moment, when seen from the perspective of the periphery, is one of more continuity than change. The suspension of rights (the right to life, the freedom of movement, for example) that we have reason to believe will occur has long been underway in these spaces. The same goes for the criminalization of poverty and of occupations on unproductive lands or unused properties.

In the face of these processes that are not new, but run the risk of being reinforced and deepened—by the moral and symbolic authorization of a governing administration, by the certainty of impunity, by the concrete support of the law—we place our bets on the power of resistance, which is more the rule than the exception in these spaces. Thus, instead of reflecting on how the weakening of democracy threatens the peripheries, we choose to consider how the peripheries enhance democracy.

Democracy is about voting in free elections

Electoral candidates view the peripheries, at best, as important spaces of ideological dispute given the large numbers of voters and, at worst, as “voting fodder” and as votes to be bought. The role of the peripheries is to demand policies that are not generic, but specific to their particular realities, aiming to improve residents’ quality of life and guarantee their rights.

More importantly, we see this in the non-reelection of establishment politicians, including those for whom peripheral areas had previously been strongholds. Peripheries are sending the message that it is not enough to merely show up at election time in order to be elected. Instead, it is increasingly necessary to think about their specificities and to demonstrate commitments beyond the electoral period.

Democracy is about electing a representative government

Peripheries are increasingly producing and electing their own candidates. They’re among the 46% of black and brown candidates who ran in the past elections, nearing the 54% that this segment of the general population represents—an increase of almost 4% compared to the 2014 elections. This means a slightly less white Congress—the number of white men elected fell by 48 representatives in 2018, corresponding to an increase in the number of elected black men and of women. Among them are black and white women and one indigenous woman.

They are the multiple candidates that have emerged in Rio de Janeiro from favelas and peripheries. In addition to claiming a space that is denied to them, these candidacies function as platforms to give visibility to debates and demands that do not normally reach the city center.

They are Renata Souza, Mônica Francisco, and Dani Monteiro, three black women and favela residents who worked under the mandate of Marielle Franco and have been elected as state representatives. It’s the candidacy of the Juntas in the state of Pernambuco, an innovative solution to the problem of representation. If individual candidacies pulverize votes, a collective candidacy would bring together representatives from different segments of the periphery: a street vendor and activist for homeless workers, a lawyer and trans woman from a community in Recife, a teacher and union activist, a journalist and feminist activist, as well as an activist and university student from the Agreste region of Pernambuco.

Another example is the Brazil Favela Front, a party currently in the process of formation that wants to launch candidates representative of the black population, favela residents, and the poor from Brazil’s rural areas and peripheries. We should also mention Todo Jovem é Rio (Every Youth is Rio), a project of Agência de Redes para a Juventude (Youth Networks Agency) that invites youth from Rio’s peripheries to imagine themselves as mayors in twenty years and that politicizes peripheral spaces by hosting debates in people’s homes, such to envision the future of the city from the periphery and challenge the still low number of representatives in the executive branch who are black and from the peripheries.

Democracy is about individual freedoms and rights

The peripheries demand respect for individual freedoms and rights. They demand respect for freedom of expression—even when this freedom is denied to them—when they sing funk, rap, and compose poems that denounce injustices, and when they write for community newspapers or study for their undergraduate, master's, and doctoral degrees. It’s the street vendor Rejane Barcellos from Maré reciting poems in Lapa or on the buses where she sells the famous cheese bread known as pão de queijo. It's Shu and Dorgo from the Enraizados movement leaving Morro Agudo in Nova Iguaçu, in the Baixada Fluminense, to rap on the SuperVia trains, making it onto a weekly radio program. It’s Edilano Cavalcante writing for Fala Manguinhos and René Silva for Voz das Comunidades. It’s Gizele Martins doing an ethnography of the São Salvador square in the South Zone neighborhood of Laranjeiras in the way that academics typically do in favela spaces. The talk is real and the words are harsh but necessary.

The peripheries demand respect for freedom of movement even when traditional spaces are denied to them, when they occupy the beach, go for a walkabout, a rolezinho in the mall, when they travel across the city (and not only for work, but to consume culture and leisure), when they bring to the favela what the asphalt, the formal city, claims as its own. It’s Kelson Succi from Alemão starring in his play "Cuidado com Neguin" in the South Zone, and Casa Brota emerging as a co-working space in Complexo do Alemão—subverting the concept of these spaces by constructing one in the favela and following the improvised construction logic of the puxadinho.

They demand respect for the right of free association, even when walking in groups leads people to cross the street, when they come together in collectives; NGOs; associations; cooperatives; in rodas, or circles (of rap, of debate); in battles (of passinho dance, of poetry); in dances; in bondes, or crews. They demand respect for the right to culture when organizing meetings with public authorities to demand the repeal of Resolution 013, which granted the Pacifying Police Unit (UPP) command the power to authorize or prohibit cultural events in occupied favelas, and in denouncing bureaucratization and other barriers to cultural events imposed by City Hall.

They demand—and fulfill—the right to education when they organize the Santa Cruz Universitário pre-vestibular, a college entrance exam preparatory course; the right to housing when the Manoel Congo Occupation inhabits an abandoned public building in the city center; and the right to services when residents of Asa Branca build their own sewage system.

They demand respect for the right to life when they denounce state-sanctioned violence, when the Fala Akari Collective organizes a public hearing in the favela to denounce crimes committed by the 41st Military Police Battalion in the favela—the same division that Marielle denounced; when the Fórum Basta de Violência, Outra Maré é Possível (No More Violence, A Different Maré is Possible Forum) organizes marches and drafts the Plan for Reducing Harm Caused by Violence in Maré; when the Fogo Cruzado app counts the shots fired during police operations and informs or contests official newspaper narratives. And when, in spite of everything, they stay alive.

Democracy is about participation and monitoring

Peripheries are spaces of participation, at times of much more direct participation than in other parts of the city. It’s the resident of Parque Colúmbia, a community that has been repeatedly flooded by the Acari River, who has a Whatsapp group with officials from municipal waste collection agency COMLURB to call for their services after floods.

It’s the participation of residents of favelas and peripheries in public hearings organized by City Hall in 2017 to discuss Rio’s Strategic Plan, and in the absence of such hearings in favelas, it’s the Meeting of Favelas to Debate the Strategic Plan held in Maré. It’s the successful mobilization of the residents of Rio das Pedras in front of City Council and in front of the mayor's house to protest the proposed verticalization of Rio das Pedras.

It’s ChecaZap, a project by Data_Labe, in Maré, and Énois, a journalism school that works with youth from the peripheries of São Paulo to check content disseminated via WhatsApp groups during the election period.

It’s the creation of bulletins to monitor the Rio Agenda 2030 proposals, presented and agreed upon in cooperation with several elected representatives. In the first of these bulletins, the Grita Baixada Forum, the Ecumenical Center for Community Formation and Education (PROFEC), a human rights defense organization in the Baixada Fluminense; and Casa Fluminense, an organization that elaborates public policies for the entire Rio de Janeiro Metropolitan Region, have monitored proposals concerning public security and the right to life, sending the following message: "Youth from the Baixada want to live."

Self-construction and self-management are salient features of the peripheries, without fail appearing in all the points described here. It’s making things happen with one’s bare hands—not in the absence of the government (for the government is very present by in the form of the military, for example)—but under the condition of government neglect. It’s raising one’s voice to demand the reduction of corruption and of socio-economic inequality, which do not allow for the benefits of democracy to be distributed throughout the social spectrum.

The role of the peripheries goes through resistance and innovation, culminating in the realization of a democracy that, like public services, reaches residents imperfectly and selectively. Democracy is the form of government in which the people exercise sovereignty. And the people are in the peripheries.