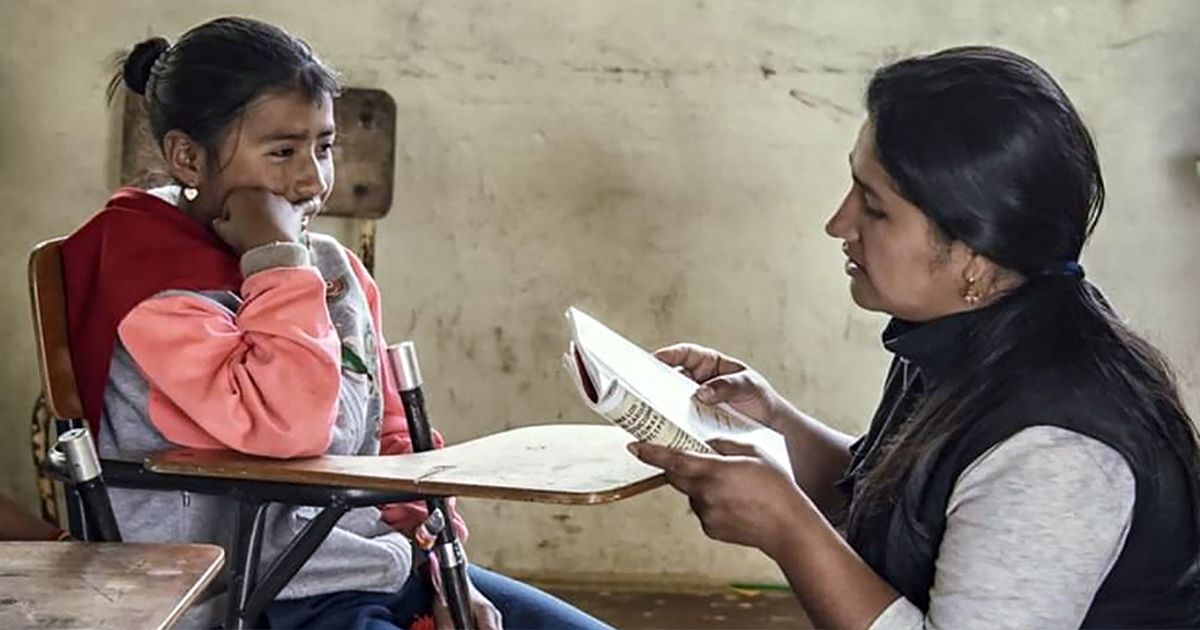 THE PEDAGOGY OF PEACE

Education is especially valuable in the precarious political contexts of Latin America; it serves as a means of resistance and a common good. Above all, public schools resist via pedagogical reinvention, especially when they are adapted to each school community on a daily basis. In Colombia, where armed conflict has given way to a context of war since 1950, schools have woven together practices of solidarity and adopted important strategies for the care of their collectives.

According to the newspaper El Tiempo, Colombia’s Special Jurisdiction for Peace (JEP) and Truth Commission recently published a report on the murders of 6,119 teachers between 1986 and 2010, of which 94% remain unpunished. Furthermore, although 2016 saw the signing of the Colombian Peace Accords1Realized under President Juan Manuel Santos, the government signed a treaty with the FARC guerrilla group, presenting a proposal to mark the definitive end of armed conflict in Colombia., the current government has not respected the agreed-upon negotiations. The situation has thus remained one of violent armed conflict, with new strikes and protests taking place since November 21, 2019.

In order to understand the relationship between armed conflict in Colombia and its implications for the school context, it is necessary to understand the history between the Liberal and Conservative political parties, which, since 1946, have disputed power and financed the illegal arms trade (and later, in the 1980s, the drug trade). The 1950s, an epoch known as La Violência, were marked by the marginalization of popular sectors and by the battle against a supposed “communist” threat hidden in rural political organizations and leftist movements. It is relevant, also, to understand that social inequality is a crucial aspect of rural movements’ right to land, and that rural areas are the territories most affected by the armed violence resulting from disputes over control of the territory and the population.

The thirst for power between the two parties culminated in conflict between three groups: the guerrillas, who took up a discourse of revolution in order to disseminate hate; the paramilitary groups, financed by politicians and business owners in order to eliminate the guerrillas; and the Colombian military, as a representative of the State. This decades-long power struggle and its accompanying violence has caused an immense impact on society at different levels and scales, directly and indirectly, by way of imposed fear and horror, most of all in areas where armed groups establish themselves.

Faced with this context of war, a network of teachers throughout Colombia, above all in indigenous and Afrocolombian territories, aligned themselves with the proposal of the Pedagogy of Peace, for a school in which students are heard and in which their feelings are not invisibilized or treated as something external to the classroom.

For Alanis Bello, a Colombian researcher, “the murder of teachers stoked fear in the community, producing a feeling of isolation, of a lack of protection. It is a complex situation, more so because schools are places for children, including young girls, and they were converted into places of forced recruitment.” Bello contextualizes the spaces where pedagogical changes were necessary for peace and explains that the rural zones are affected by the lack of State presence.

The participation of schools as the only State presence in these territories thus led teachers to fulfill social leadership roles in the community. A clear example of this is the collaboration of teachers in assuming the role of the State in registering new-borns in rural areas. In taking on the role of the State in these spaces, they suffered attacks from armed sectors, from the right, from the left, and even from the military itself, including threats, evictions, and murder.

Faced with this context of war, a network of teachers throughout Colombia, above all in indigenous and Afrocolombian territories, aligned themselves with the proposal of the Pedagogy of Peace, for a school in which students are heard and in which their feelings are not invisibilized or treated as something external to the classroom. In order to bolster the work of teachers affected directly or indirectly by armed conflict, didactic support materials were created with the goal of constructing a school environment that embraces the feelings and emotions and memories of students. This nurturing coexistence is a strategy created by teachers, and, above all, by Colombian teachers, in order to deal with loss, fear, and trauma.

The Pedagogy of Peace in Practice

Bello tells us that, faced with fear and terror, the teachers decided to concentrate their efforts on peace, presenting popular demands to the State and undertaking work involving the construction of collective and individual memory. This meant teaching the history of the origins of oppression and silencing resulting from power struggles in order to ensure that the years of violence do not repeat themselves. The Pedagogy of Peace is a didactic tool for emotional reparation, a methodology for comforting pain amid the terror of war, the loss of neighbors, parents, siblings, and other family members. The feelings that have been, until now, systematically ignored, gain a place in the context of public schools. Rather than a passive pedagogy, this method seeks to simplify — rather than just holding hands, it’s about using them.

The Pedagogy of Peace seeks to create a culture of resistance based in union. It is, above all, a community pedagogy. The school community meets in order to remember those that were murdered, to ask for demilitarization, to ask for improvements in schools, and to fight for the end of violence generated by armed conflict.

The didactic material “Pedagogía de las emociones para la paz” (Pedagogy of emotions for peace), financed by the Bogotá mayor’s office and by the Institute for Educational Research and Pedagogical Development (IDEP), proposes a learning process based in new ways of coexisting, centered in four pillars: feelings, diversity, justice, and life meaning. Through these pillars, the project seeks to address themes that are essential to the construction of critical citizenship for students: emotion and warmth, otherness and corporeality, peace and dignity, territory and nature.

According to the material, in order to form these new practices of coexistence, it will be necessary that those upon which power is exercised have their own power potentialized, such that individuals and the community broaden their capacity for defining, with a high degree of autonomy, their own development.

For Bello, what the Colombian teachers are doing is opening space for dororidade2A play on sorority and the Portuguese word for pain, dor — an intersectional feminist concept coined by Vilma Piedade that deepens the concept of sorority with an empathy born of shared pain. The researcher critiques the distanced position public schools have taken in relation to emotions and, primarily, in relation to the pain of their students. Faced with the context of armed violence, schools, at times, take no position and create no opening for students to express their reactions to situations of vulnerability. However, the Pedagogy of Peace shows that schools can take on a different mode, one in which teachers exercise an important role in embracing the trajectories of their students. In this practice, the student is not treated as a language-less subject, as in the concept of infancy in Latin (in-fant, or unable to speak), but as an individual filled with history, memory, and identity.

With an innovative methodology, the Pedagogy of Peace concentrates on ethical, esthetic, nurturing, daily practices that create possibilities for a more just, free, creative, and collective life3As stated in the didactic material Pedagogia de las emociones para la paz. In this way, its practices demonstrate similarities with the paths trodden by teachers of the public schools in peripheral territories of Rio de Janeiro. That is, there exists, in this territory, a creative potency among residents that facilitates nurturing connections in networks of support and solidarity.

The school community meets in order to remember those that were murdered, to ask for demilitarization, to ask for improvements in schools, and to fight for the end of violence generated by armed conflict.

Considering the work of public schools in peripheral territories, the use of these tools, applying the Pedagogy of Peace, may allow for the strengthening of existing local practices in the search for the construction of a more familial, welcoming, and fertile school environment going forward.

Bello also dedicated herself to undertaking fieldwork in Rio de Janeiro, examining firsthand the work of public school teachers that work in the peripheries of Rio. As she tells it, her contact with teachers there demonstrated that the practice of care with students pervades the classrooms and the curriculum directives. Though they were not part of an articulated network for pondering nurturing educational methodologies, the interviewed teachers undertake a work of nurturing approximation with their students. Teachers pursue quality teaching through extra didactic materials, with humanized contact inside the classroom and with attention dedicated to the individual issues of each student as an active subject in their own personal history.

It is important to note that these are black teachers that opted for a nurturing pedagogy based on their own perspectives in respect to public education in Brazil, and that built potent strategies — independently, daily — for the classroom. For this reason, it is worth affirming that the benefits of an education centered in nurturing may be key to the construction of memory for Latin American peoples. The power to recognize ourselves through our pain and our emotions is also a process of uniting the collective, of coexisting with our differences.

BACK TO TOP
PREVIOUS ISSUES
previousid1255
Alternative Experiences v.1  n.3  2019
SIGN UP FOR THE NEWSLETTER