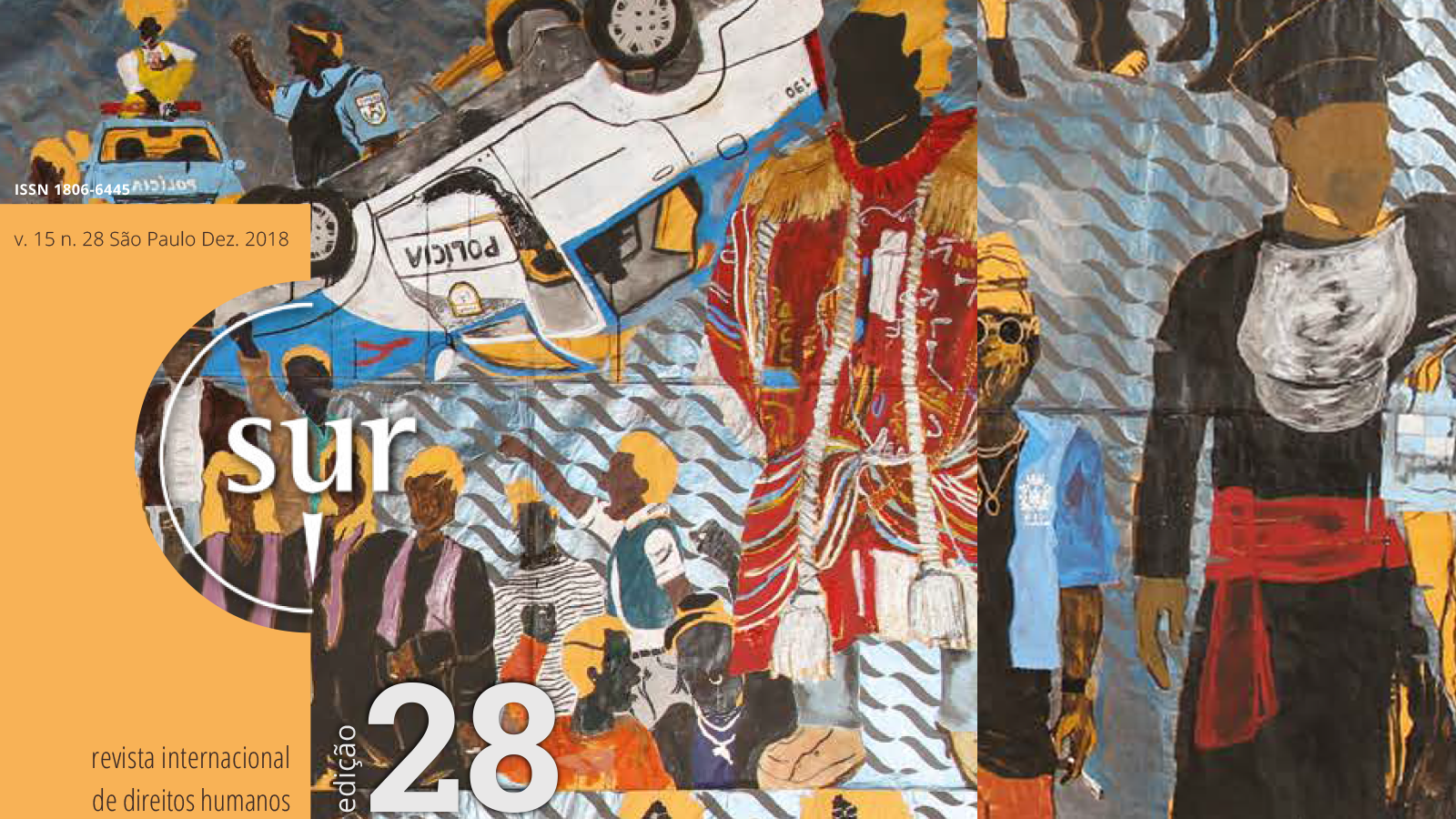 I remember well the first conversation we had about Issue #28 of Revista Sur and the challenge of launching an issue on race and human rights at Conectas. The responsibility of addressing the theme, at that point unexplored by the organization, was both enormous and daunting.

The title for this issue, Race and human rights: moving structures (Raça e direitos humanos: movendo estruturas), was decided upon by a team that included Sueli Carneiro (of Geledés) as guest editor and Thiago Amparo (of the Getúlio Vargas Foundation, FGV) as executive editor. At the time, I held the position of assistant editor. We arrived at the conclusion that a title such as “race and human rights” on its own would not allow us to communicate the gravity that the theme needed to have — that it would have — in Sur, at Conectas, and in the international (and hegemonic) human rights movement, an important interlocutor of ours. Perverse structures must crumble, and that of racism, especially, must be shattered. Thus, the final title seemed adequate, or at least, a good start.

In Sur, we have had a plethora of material on diverse discourses and practices in the area of human rights, but race and racism, both as theme and reality, seemed to us to be something truly “new.” This may sound paradoxical and perhaps contradictory, considering that we are an international publication that promotes debates and constructs narratives on human rights from a Global South perspective — from the South, this geopolitical category that mashes together territories, histories, and subjugated bodies as well as the trajectories of their resistance: a racialized South.

The preparation of this issue required us to examine the magazine in a critical way, to recognize the harsh facts: in our 27 prior issues we had published close to nothing about racism, and very few texts written by Black authors. We discussed and pondered the issue of human rights while leaving race to the side — race, a transversal element in the fight for rights, one especially present in Brazil, the country in which our journal is produced.

For Special Rapporteur to the United Nations Tendayi Achiume, this omission was no exception, no anomaly. Rather, it was characteristic of the marginality of racial equality within the global human rights agenda itself. The first exercise for Sur — and this would not be easy — was to recognize structural racism and its effects in our own editorial practices.

Thus began a small but important internal change. And with it, came all of the discomfort, a by-product of the white fragility that Denise Carreira illustrated masterfully in her text. We remember that Sur, despite important movements to pluralize voices, formats, and language, including with the participation of nonw-hite people throughout its history, still carries with it the scars and weight of the academic whiteness that forged it.

The process of constructing Sur 28 was intense. We learned much and we learned in many different ways. The team was challenged by conceptual demands, by language and style, demands from Black authors, from the movements to which they belong, specific issues that ended up placing in question our entire editorial policy. It was not enough to have Black people in editing positions and authoring texts; it was necessary to address each element of the process, all of its steps, and all of the people involved.

We knew that it would be an important issue in the journal's history, but we could not have imagined the reach of the changes it demanded. Evidently, many of these changes would only take effect in practice in later issues. Some even impacted our organizational dynamic, guarding over the anti-racist commitment that we have taken on and committed to reviewing constantly.

We imposed some goals. We decided, for example, to increase our Black authorship. We thus established a participation benchmark that would gradually increase with each issue. In Sur 29, that percentage was 22%. In Sur 30, we reached 30% Black authorship. We also took it upon ourselves to map out and diversify the racial profile of our pool of translation and editing professionals.

Sur 28 was a watermark. Almost three years after its publication, the way in which we perceive the creation of each new issue began to change. It became a much more conscious and engaged process, with substantive action for equality and inclusion. This meant taking more time, designing and following specific protocols, taking on new practices and awaiting non-immediate results. This was the price we paid, and challenges remain.

The authorial grants from that issue of Sur were also a learning process. Receiving more than 800 candidates for only three fellowship spots demonstrated the dearth of incentives behind research in race and racism, and exposed the precarious conditions in which the fight for and production of Black knowledge take place in Brazil.

On the other hand, the fellowships worked strategically, creating a precedent that promotional and philanthropic agencies should take note of. Beyond recognizing the power that they have in setting the global human rights agenda, it is imperative that these agencies examine their own commitment to racial equity and equality in the ambit of their social justice work. The ways in which race pervades the strategies used, the topics of interest, and the distribution of resources can determine its own political and social efficacy. Nicollete Naylor wrote a powerful and courageous text on this, placing these ideas on the table.

The issue was published in 2018, and to this day we receive comments on the impact of one text or another from this edition. Specifically, for Conectas, Sur 28 became an obligatory reference for the work of the organization in a number of fronts, as recommended reading and as a source of inspiration. It was the registration of a beginning, albeit a late one, as well as a reminder of our commitment.

With that, the challenge of placing race at the center of the debate around justice and human rights continues. Below are a few of our lessons learned from Sur 28, in the richness of its contributions:

1. The fight against racism cannot cease. This is because it is a fight for life, a fight for existence. The price of structural racism, in all of its expressions, is the criminalization and/or extinguishing of Black lives:

Black women incarcerated or killed by clandestine abortions. Black youth of urban peripheries killed in the war on drugs. Mothers of victims of the State that had to transform their pain and mourning into political organization and a fight for dignity and neglected rights.

2. In order for structural changes to take place in the human rights agenda, it is necessary to revolutionize the various fields and spaces in which this agenda is defined, legislated, and judged. This includes everything from juridical narratives and the positioning of courts to the agendas of multilateral bodies.

3. The pursuit of adequate resources for combating racism, as well as documenting and researching it, continues to be an enormous challenge for Black human rights defenders as well as their movements. In this sense, it is important that foundations that offer economic support to the promotion and defense of human rights and democracy around the world must be more attuned to the fact that the question of race matters.

4.Global Black resistance is a history filled with different voices, faces, and strategies. That is what art, in Afro-Atlantic Histories, shows us. The contemporary Black movement is also a reflection of this plurality, one that must be recognized and taken seriously. As long as racism remains synonymous with death, vibrant life, that life dared to be lived, will be synonymous with the anti-racist struggle. That includes the fight of transvestite and transexual women within the Black movement.

Finally, moving the structure of racism continues to be an urgent task for human rights organizations and must be present in our discursive, editorial and political practices. Sur 28 is, and will continue to be, a small contribution, an invitation to revise, deconstruct, learn, and, principally, to take on the challenges of a task that remains unfinished, but continues to belong to us all.