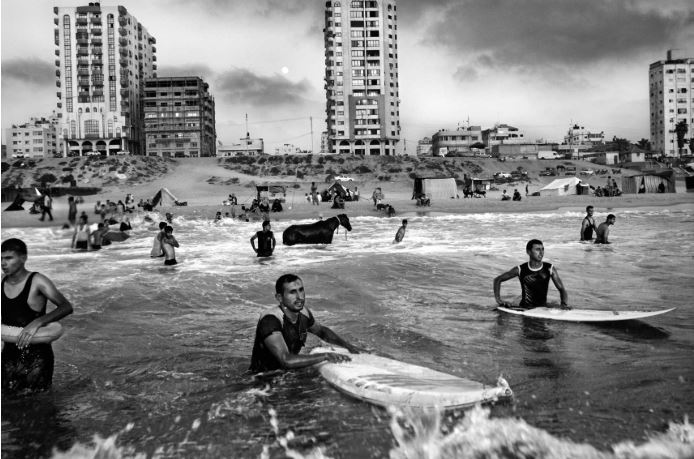 Palestinians face extremely harsh conditions in the Gaza Strip. There is not enough work, electricity, or even potable water in an area home to over two million inhabitants, featuring the highest demographic density on the planet. As if that were not enough, because of Israeli blockades and occupation, especially since 2006, we are not free to circulate, not even to leave Gaza.

There are so many talented and educated youngsters in the Gaza Strip, but given to the acute lack of appropriate conditions, too many young athletes and artists go unheard of outside Gaza. Such is the case of surfing, a sport present in Gaza since the 1990s. Located on the west coast of the Mediterranean Sea, with 25 miles of shoreline, Gaza's port is practically disabled, with fishing and sealing activities severely restricted. When it comes to waves though, powerful and frequent throughout the year, those belong to us.

And still, Israel denies us the right to surf completely. We do not have the necessary material to produce surfboards in Gaza. We might consider importing them, if it were not for Israel's absolute prohibition on imported surfboards (for so-called security reasons). If surfboard prohibition was not enough, even swimming gear, including those for winter, are prohibited from entering Gaza.

We honestly do not understand what security reasons can justify depriving Gaza's youth of owning fiberglass surfboards. In what way does surfing pose a threat to the State's security?

It is precisely this element of Israeli deprivation that the GAZA Surf Club seeks to resist. Over the past ten years, we have sought to organize a Gaza surf community that fights to encourage the consolidation and expansion of surf for Palestinians in Gaza. In this way, we affirm that we do have rights,  including the right to sport and leisure—a basic right to every citizen. Despite severe Israeli sanctions, we have already managed to import a few dozen boards. We have succeeded in organizing ourselves collectively, but above all, we have been resisting: the world is becoming more and more aware that surf is an emancipatory practice for Gaza.

In spite of the enormous difficulty Palestinians face in leaving Gaza, I managed to travel to Hawaii. One of the plans I had was to learn how to produce, maintain, and trade surfboards; how to create a surf school and to build a space in Gaza dedicated to surf. I could meet surfers in Hawaii engaged in supporting our surf club, as well as surfer Carissa Moore and surfboard and gear producer Hurley. We would then consolidate the club by training a generation of international surf competitors.

This entire set-up left me very excited and increasingly willing to consolidate the GAZA Surf Club. We also sought help with several human rights organizations for overcoming the surfboard import prohibition. Though we are yet to obtain Israeli permission for sending boards to Gaza—since Israel is incapable of acknowledging our most fundamental rights—we continue our struggle and our resistance. Boards are a central element for consolidating the GAZA Surf Club. Even today we have no more than 25 boards, donated by Mathew Olson, from Explore Corps.

We will continue to seek new opportunities to construct the GAZA Surf Club, because, in spite of everything, surfing is a popular sport in Gaza and many children and youngsters are more than willing to learn how to surf. We believe this day will come —if not today, tomorrow— but until it does, our efforts will not cease.

If everything that happens against Gaza and its Palestinian population, as I said, finds support in Israel's Zionist oppression, whose goal is also to erase the Palestinian creative potency, in order to show the West that Palestinians and Gaza youth are terrorists and hostile people who hate life, live in war and do not seek peace, our counter-argument is that we are indeed youngsters who love life, but it is not the life of continuous humiliation that we want. We only want to live as the rest of the world lives. Nor do we need to discuss whether it is peace what Israel seeks: the successive wars waged against the Gaza Strip speak for themselves.