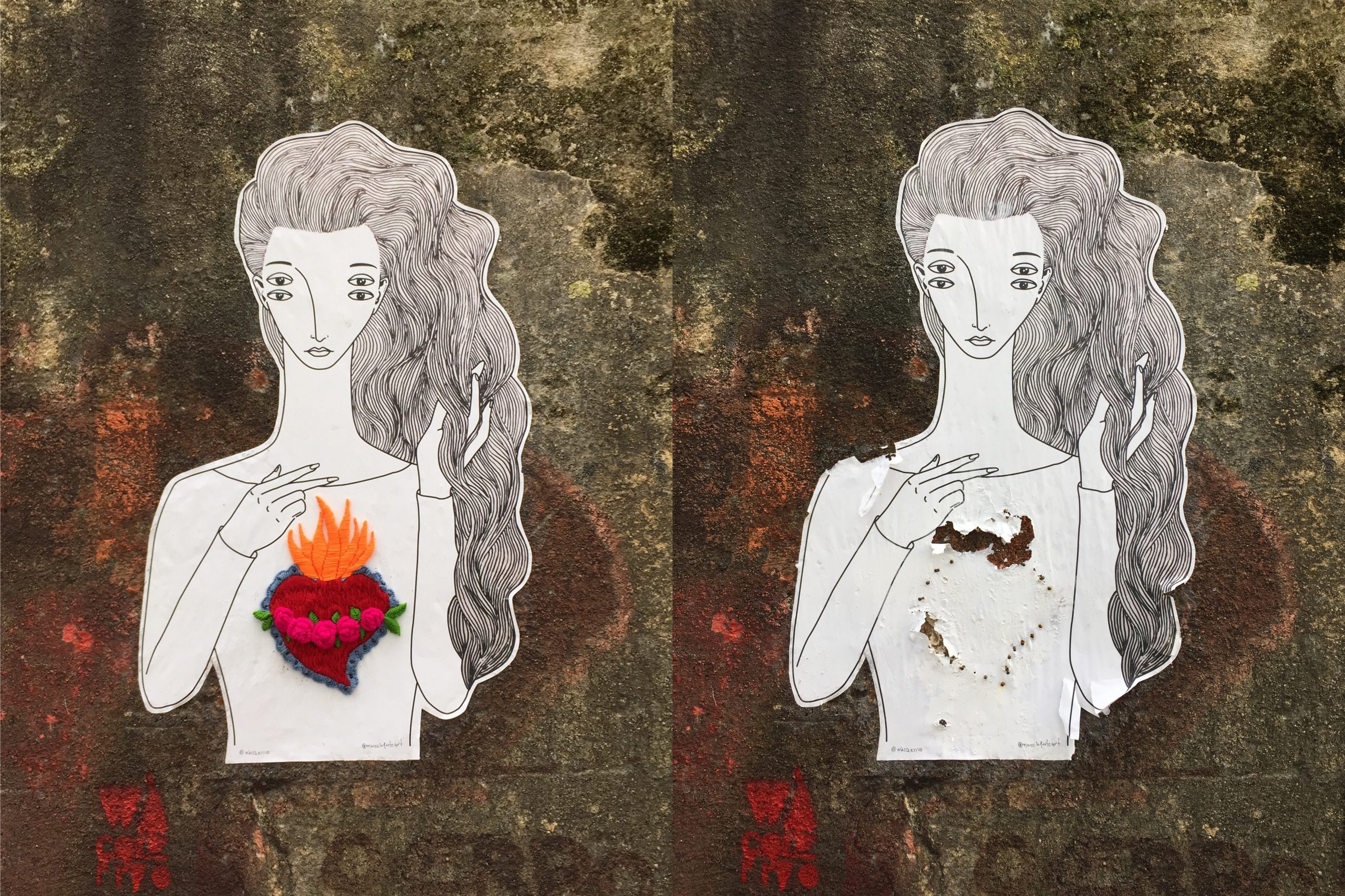 The word “Wa” means “to walk” in the indigenous language of Kariri (the people that lived here and gave our region, Cariri, its name). This is the name we chose to represent ourselves. We are a collective of diverse women but we walk together. Together we create, together we express, together we redefine and bring the practice of craftsmanship from domestic, intimate spaces into the streets, expanding the possibilities for the production of urban art in a universe dominated by paint and masculine protagonism.

Artisan craft techniques like embroidery, sewing, crochet, among others, are traditionally recognized as female practices, and, for a long time, were not even considered artistic expressions. As with everything women do, they go underappreciated and underestimated by patriarchal society. We propose other directions for such techniques in contemporary times, that they may be in-submissive and transgressive, that they may engage with political discourse and be understood as contemporary art in public spaces, on rails and on walls in abandoned spaces, vying for space with other expressions like graffiti art and tags.

In this perspective we continue to mark our place in the world, spreading our work through Cariri, Brazil, and Portugal, communicating where we came from and dealing with universal themes like feminism, peace, and love. We also seek to establish new creative connections in outside dialogues, exercising other forms of collectivity, such as the workshops that we hold, that occur as experiences beyond that of teaching-learning. Our own internal process of living and coexisting is just as important and significant as the outcomes we achieve in projects that affect people in the streets. The workshop is our “place” of birth, and reliving this practice allows for the creation of new artistic collectives, even only temporarily, that nourish us creatively and strengthen us with the creation of new bonds.

Something that had united us from the beginning was the desire to talk about ourselves and our place; the embroidery designs resulting from our first workshop showed us this and, in their way, represent different types of resistance in the territory.

The bird popularly known as Soldadinho-do-Araripe is an endemic species that has become a strong symbol for the preservation of the environment in our region. The embroidery above, with its drawing, was fixed to an abandoned house in a busy intersection right in the center of the city of Crato, Ceará. The image reflects the disregard suffered by a species of tremendous importance for nature and for the well-being of the local population.

Índia Kariri, who today blesses and protects the entrance to the house of our great artist Abidoral Jamacaru, reminds us of the Indian massacre that occurred during the Kariris Confederation between 1683 and 1713, as well as the destruction of the traces of life and material culture of the people that originally inhabited our land and today give their name to the region. This Kariri woman represents resistance to violence, slavery, land grabbing and the erasing of beliefs and traditions.

Mateus (third image) is a leading character of our Reisado1“a musical and theatrical tradition associated with Epiphany, a Christian holiday on the sixth of January, and practiced year-round in the Cariri region in Ceará's interior” - http://www.scielo.br/scielo.php?script=sci_arttext&pid=S1809-43412011000100009 - one of the greatest and most vivid cultural manifestations of the fusion of ethnicities during the painful process of colonization in the region. This festival is presented through dance, singing and dramatic representation, maintaining its historic relationship with the popular feast of the Three Kings. In Cariri, the presence of the black person in sugarcane culture makes the Reisado appear as Kings of Congo, already fused with indigenous elements. The so-called "popular" culture has deep roots, demonstrating resistance and stubbornness; when it manifests itself, it brings us back to our ancestry. In embroidered work’s drawing, the double image of Mateus also takes on the contemporary issue of mobility in urban centers, reinforcing the importance of bicycle use for transportation.

Partnership with other artists is another form of sharing, connection, and dialogue. In Portugal, in the series Wà Coração (heart), each invited artist collaborates through a physical artistic language. The idea is that each collaborator creates a representation of the feminine universe and the plural world of women in the two-dimensional platform of drawing. Each proposal is designed to be transferred to poster paper for outdoor plastering. The artist's work/drawing is then added to the work of the Collective, which forms the “heart” to be affixed/nailed to each character's chest. With this gesture/sum, the images of numerous and diverse women mix with and complete each other in the quest to represent our reality.

The first work of the series took place in Coimbra with the artist Marcelo Forte; the second, in Braga, with the artist Diana Medina; and the third in Guimarães, with the artist Aglaíze Damasceno. These are experiences that broaden our perspective—that with which we affect one another and through which we are affected. This collaborative work becomes an artistic undertaking characterized by new space-time connections, interactivity in multiple domains, and the fusion of languages and aesthetics.

In our most recent work, we paid tribute to Crislaine Guedes, 21 years old, a playful leader in Reisado Estrela Guia, a transsexual woman, poor, from the peripheries, with no formal education. Crislaine was brutally murdered on April 1, 2019. Our intervention sought to eternalize the memory of her colors, beauty, and joy. We used embroidery, macrame, paint, and collage work on a photo by Alana Morais. The art/homage was posted in the neighborhood of João Cabral, in Juazeiro do Norte, Ceará, the city where Crislaine lived and actively participated in cultural and religious movements. This is our way of combatting the silence surrounding violence against trans people.

Our work is grounded in the slow pace of artisanal labor, but just as important are the qualities of transience and ephemerality. Exposed in public spaces, without any type of surveillance or supervision, our work is subject to interaction with others. This interaction usually happens sooner or later as part of the eternal exercise of detachment that we now also perceive as co-creation. What does this tell us? That we seek, transversally, to play a social function and to “de-elite-ize” artistic production, opening it to the practice of collective creation and experimentation, promoting debates, capable of reconnecting the subject and the world. We believe in art for everyone, with everyone, and by everyone.

Um grande bem-haja!
A big thanks to you all!